This course will teach you how to articulate the historically documented facts of white enslavement at the hands of Black, African ancient Egyptians. It will introduce you to the historical record attesting to that enslavement. You will be shown geographically where this ‘black on white enslavement’ occurred and who was responsible for it; yes, this course documents names, dates and places; it covers a period of over 700 years, and spans distances of thousands of miles. This course will make it possible for Black persons to not only stop seeing white persons exclusively as their former slave masters but instead to begin seeing them as their former slaves in Africa.

The psychology of seeing one’s self as simply being ‘former slaves’ of another group outside of your own, can be just as damaging and debilitating as the actual enslavement itself was. In fact, to leave one with that very impression is to perpetually continue the enslavement process itself. It is that very real debilitating perspective that this course has been designed to reverse which is the false idea that black people have somehow been slaves for white people, but that white people have somehow never been enslaved en masse by black people… nothing could be further from the truth.

This course will make it quite apparent that white people were indeed enslaved in Africa, in ancient Egypt, by blacks, and just as importantly, they have not forgotten. It will be made plain to you how they have maintained a memory of that enslavement and how they have inserted those distant memories into their popular media throughout the years via books, film, etc. It will also provide a basis for understanding the underlying motive behind aggressive white behavior towards black people. For those of you seeking to understand the true backdrop story between white and black in the world both yesterday and today, and perhaps in the future as well... this is a course you want to take, and one, you will never forget, taught, by a Master Teacher (in training). 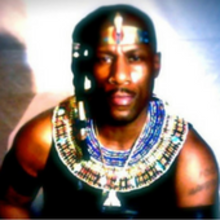 Shakka-Ahmose is a well sought after research specialists who is deeply engaged in the structural restoration of classical African history. His erudite (scholarly) approach has garnered him a worldwide following. Since the demand for his presentations are prolific and his availability limited, this platform has been created to facilitate a learning experience guaranteed to take your own personal education to the next level. Let's Stay Connected:Website: http://www.ShakkaAhmose.comInstagram: https://www.instagram.com/shakka_ahmose/Facebook: https://www.facebook.com/SHAKKAAHMOSEROCKS/Youtube: https://www.youtube.com/user/knowitallification
Click HERE to access the course & get in on the conversation!

The power point/ the live feed everything was on point ...excellent looking forward to the 2nd part ...

The power point/ the live feed everything was on point ...excellent looking forward to the 2nd part ...